Who would have thought September would be such a great month for movies? The month when UK releases are US comedy’s dumping ground saw Friends With Benefits, 30 Minutes Or Less, Crazy, Stupid, Love and The Change-Up released, two of these were great, one was good, one was The Change-Up.

If comedy wasn’t your bag, you could appreciate that new 3D technology, as Sex & Zen: Extreme Ecstasy tortured and raped it’s way to bombing, and Fright Night saw a surprisingly brilliant take on the horror genre. Disappointing British ensemble heaven Tinker, Tailor, Soldier, Spy came out and rocketed the box office, unlike Taylor Lautner’s attempt to pretend he’s anything but meat, Abduction, fell by the wayside.

Terrible films were prevalent in the month, Warrior, Killer Elite, The Art Of Getting By, Red State, Melancholia, Troll Hunter, they all popped into cinemas, if you were smart, you avoided and saw Jurassic Park in it’s re-release format, or saw stylish as all get out Drive in a sophisticated cinema type setting.

Best FIlm Of The Month: Drive

This Month We Lost: Cliff Robertson

October, the lost month. For many it was the dark times as winter crept forward, the sun set earlier, the cold increased and films got a little less interesting.

Johnny English Reborn reared it’s abhorrent head to win the box office, Woody Allen’s lacking latest, Midnight In Paris, tried to do battle, as did The Lion King’s 3D release. Heck, even Paddy Considine had a go at cinema with Tyrannosaur, which in a perfect world would let Olivia Coleman get an Oscar nod. Although in a perfect world the subject matter would be alien.

Paul WS Anderson revealed his 3D Three Musketeers, and whilst it had too much James Corden (Any is too much), it was fun, silly and a good use of a few hours.

Footloose lost and Real Steel proved it’s metal in terms of money, Sleeping Beauty and Texas Killing Fields slipped passed everyone, Contagion had Gwyneth Paltrow’s head autopsied, and made everyone shit scared to ever leave the house again, unlike Paranormal Activity 3, which somehow had HD level VHS footage. Kevin was talked about a lot, despite not being worth anyone’s time, Tintin had his first Adventure, and it was good, whilst we all had a nice little drama in the form of The Help, which whilst cheesy as hell, was wonderful and entertaining too.

Ryan Gosling ended his year with The Ides Of March, a West Wing-type drama thriller from George Clooney, which had only slightly more political intrigue than Roland Emmerich’s Anonymous, but was so much better.

Yet in all of this, one film came out unsung by the masses. The Silence was a harrowing, tough, intriguing, intense, genius piece of cinema that had a very limited release, meaning no one saw it. Shame.

Best Film Of The Month: The Silence

This Month We Lost: Charles Napier 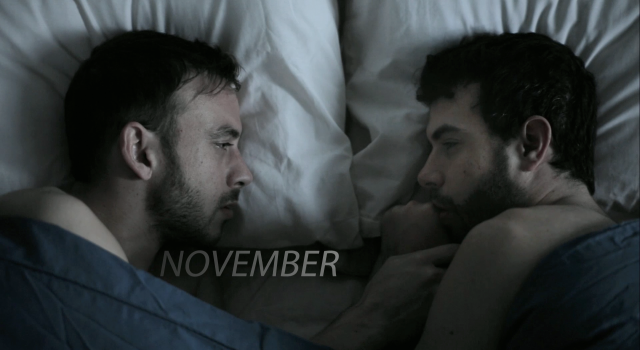 In Time opened November by reminding us that The Adjustment Bureau isn’t the only sci-fi with formal attired young people running around, and Machine Gun Preacher gave us some good stuff from Michael Shannon, and about an hour and a half of other crap around it. Speaking of crap, Tower Heist.

Gorgeous, amazing, brilliant drama Weekend caught a niche audience and captivated them throughout November as something of an arthouse hit. A moving, touching, outstanding romance just when we needed something to truly and whole-heartedly love, thank goodness for that film. Christmas came early as Aardman’s Arthur Christmas slowly rose to chart success, fighting with 300 spoof Immortals for the number one slot, and first losing. Disappointing Andrea Arnold adaptation of Wuthering Heights withered (Or wuthered) and died on release, much like both Nic Cage releases, Trespass and Justice. When Nic Cage’s hair isn’t the silliest of the head appearances, you’ve got trouble, Guy Pearce.

Twilight had another film released, no one notices. 50/50 failed to be half as good as it promised, Moneyball was mostly Brad Pitt Eats, My Week With Marilyn went on for a long time and Take Shelter hunkered down to low screen averages, all in all a mixed, quiet month.

Best Film Of The Month: Weekend

This Month We Lost: Ken Russell

Remember the first week of this month? Oh sure, there was Hugo and Happy Feet Two, but there was also Camp Hell (Starring Jesse Eisenberg in 5 minutes of it!) and The Big Year, which a friend described as shit. It was a big week, with festival meh We Have A Pope disappointing, shockingly enough, as a film about a newly elected pope questioning if he is up to the task whilst a psychiatrist comes to the Vatican and, at one point, sets up a Cardinal Volleyball Tournament. That’s right, this film has Cardinals playing volleyball together, in slow mo too! And yet, was just, eh. Also, The Thing 2011 finally came out.

But, speaking of hugely delayed movies, a certain little indie film finally got a UK release, on one screen, for a 2.5 hour film shot in 2005. Margaret, starring Anna Paquin, Mark Ruffalo, Keiran Culkin, Matthew Broderick (Oh yeah, it’s the year of him, 3 films within 3 months), Matt Damon, Jean Reno and Allison Janney pop up in a remarkably simple tale of a teen girl growing up, whilst not really embracing the maturity required to become a woman. I mean, that’s one interpretation, but it’s a good one, right? So, that 150 minute film took 6 years to get out here, and expanded consistently for weeks afterwards. Take that, Fox Searchlight!

They were too focussed on the release of really low-budget indie hit Another Earth, which was fine enough, but naturally wasn’t as successful as shameful New Year’s Eve, which had more celebrities than sense. If it had 2 actors, it’d still have that ratio of sense. Puss In Boots popped up in cinemas, a slight film, but better than some of the Shreks, not exactly one for the 3D annals though. Unlike, say, A Very Harold & Kumar 3D Christmas. Gimmicky as all hell, but a superbly funny, silly, vulgar christmas film with two leads we love, right? Plus good ol’ Thomas Lennon, Neil Patrick Harris and Danny effing Trejo. In 3D!

Alvin And The Chipmunks ended the most important saga of our times, with Chipwrecked, featuring David “Mr. Show” “Arrested Development” Cross in a pelican suit. The ENTIRE film. It. Is. Horrible.

But hey, Sherlock Holmes: A Game Of Shadows was also on release, featuring the least subtle homoerotic subplot since Happy Feet Two, it somehow managed to get right beats that the first failed with, and generally was a more entertaining, interesting film.

Fincher’s lame-wad Girl With A Dragon Tattoo retread was unfortunately pretty much like the Swedish film, sure they made Lisbeth a little less muscular and powerful at points, but if you put both films side by side, beyond budget, actors and some of Fincher’s imagery, it’s hard to really give a crap. Not that the story and characters are interesting anyway.

The Artist was a failure of a hyped Oscar pic, a silent comedy drama which forgot the joy of early cinema and went for a surprisingly dark, and slow, plot, then went for meta sound jokes for those who enjoy self-referential humour.

Thankfully we don’t end the year on a sour note, with IMAXED Mission: Impossible Ghost Protocol showing that Brad Bird is a grand action director, and Tom Cruise is still making great films. This time, simon Pegg, Jeremy Renner and Paula Patton managed to be part of Cruise’s Crew (Tom’s Crewse?) and get their own backstories/sub-plots, well done film, and also it was super fun.

Worst Film of the month: Alvin & The Chipmunks: Chipwrecked 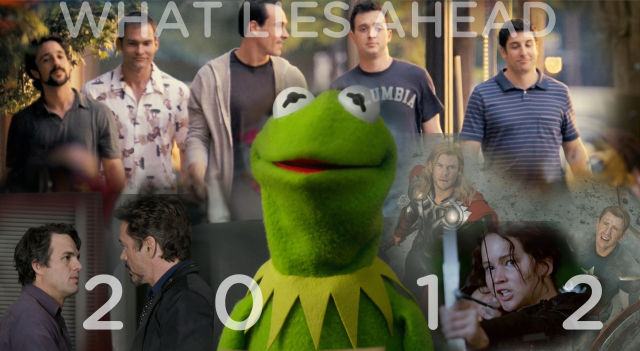 So, what’s to look forward to in the coming year?

Well, it looks like unlike the past two years, we WILL be getting the Cabin In The Woods, and Tim & Eric have a movie coming up. Simon West may make The Expendables 2 watchable, certainly we all want to see Jack & Jill almost as much as The Muppets, Crank team Neveldine/Taylor might make Ghost Rider a better franchise than the last outing, Andrew Stanton goes live action, kinda, with John Carter, as do Chris Miller and Phil Lord with, uhhhm, 21 Jump Street. Oh boys.

You can choose Mirror Mirror (Don’t) or Snow White & The Huntsman (Yes), and The Pirates! looks to be a crazy little slice of brilliance.

Ones to look out for though? I’d be remissed to ignore American Pie Reunion, the first three were such a big part of my late childhood and early teenagenessess, Nick Stoller and Jason Segal re-team for The Five Year Engagement, which looks hysterical, Timur Bekmambetov’s Abe Lincoln: Vampire hunter should be crazy fun given the director’s last few films, and, quite frankly, Adam Shankman’s Rock Of Ages better be as good as Hairspray. The cast, the songs, the look seem good, now let’s hope it doesn’t outstay it’s welcome when the release comes about.

We’ve had a great year of film, and I fully expect 2012 to be solid, if not quite as good.