Wow, we’re almost there aren’t we?

The penultimate Muppet theatrical release pre-Segel, taking on the qualities of The Muppet’s Christmas Carol (Which are numerous and splendourful), The Muppet’s Treasure Island manages to at times be darker, and throw in a lot more human interest in the story unfolding before us, as Jim Hawkins (Kevin Bishop, more later) finds a fabled treasure map that old Billy Connelly wouldn’t stop banging on about, and joins Kermit, Sam, Fozzie, Bunsen, Beaker, Gonzo, Rizzo and a whole collection of holidaying rats on a big boat, whose maidenhead is, naturally, Statler and Walforf.

In addition, hidden away deep within the bowels of the ship, Tim Curry’s Long John Silver sits in wait, coming up to do some songs with the rest of them.

So, what are we dealing with here? Well, based on Christmas Carol’s success, Gonzo and Rizzo are given the roles of best friends with Hawkins, sometimes prompting fourth-wall breaks, often just inherently being modern Muppets in an old time setting, and the film brings up more darkness than the previous film. Skulls, death, constant presence of threat, I remember being very scared of some scenes as a kid. When Connelly bangs on about the Black Spot, I had a flashback to running out of the room watching a video copy. I was, also, prone to running out of the room when an advert for, I think it was Jif powder, came on. The one where the plastic container burst out of a cupboard. Why did it have to burst? Couldn’t it slowly sneak out, politely?

So, using a famous old story with notable characters, The Muppets take on Treasure Island, I’m not entirely sure how faithful the adaptation, because like so many of my generation, I refuse to read anything more than 2 lines, which of course explains the quality of this post. I’m going to go ahead and say this is 110% accurate to the source novel. Which begs the question, when did “Hiyah!” become a common phrase for “I’ma karate chop you with my pig-powered hoofs”? So, pirates in a kids film, before 2003 this was something of a novel idea, literally. Pirates, whilst synonymous with everyone in their iconography, weren’t really a big thing back in 1996. As a 6 year old, I was getting in trouble for playing Power Rangers and beginning to learn what a Star War was. Bless my friends, they would make me, make me, be Han Solo, because they all wanted to be Luke. I’m so Solo it’s awesome. But I digress, and regress, pirates weren’t ‘all that’, certainly not in the playground of Oglethorpe Primary in the ’95-’96 school year, and so this was as close to the majesty I’m sure much older folk might have when thinking back fondly to the pirate and adventure movies of their childhood. We have Muppet’s Treasure Island. Which does boast the song “Cabin Fever”. But somehow it also has an overlong second half that feels like it’s going nowhere constantly.

I don’t mean to be so down on Muppet Movies, but the fact of the matter is, I’m sitting at home of an afternoon, drink in one hand, snack in another, remote in the third hand, and after thirty minutes, I stop caring. The focus on Hawkins and Long John was fine enough, but as Kermit got a B-story, as Long John became the bad guy, and then not, or is he? No. Well, I lost focus, and I lost interest. Just give me Beaker singing to Animal’s drumming, as Statler and Waldorf comment on the ensuing demise of mainstream music, I’ll be happy. There’s no need for so many stories to intertwine, especially when you have many golden characters, each could easily front their own film, stuck in the background, or worse, forgotten about, much like the humour, which falls flat in act three. Once the ship hits land, the humour dries up. 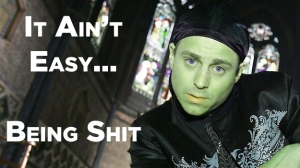 On a different note, Kevin Bishop. My god. The twat from FM, Star Stories and the self-titled The I’m A Tw…Kevin Bishop Show. He could sing. And act. And speak relatively pleasantly. Why, then, has he massacred the good name of comedy, and brought in a rather rough estuary accent to the proceedings? For a man that has performed next to comedians as famous as Billy Connelly Jennifer Saunders and Fozzie Bear, he should have some damn respect for the craft, and leave it alone. Go on, leave, Bishop, leave until you learn your lessons. Stop disrespecting the good name of The Muppets.

In the end, Muppet’s Treasure Island is just as I remember it, without managing to remember the film at all. It has a few good moments, a memorable song, a nice plethora of felt on display, if not used particularly well, and, well, as soon as the end credits begin, you forget the whole film. Kinda not so great after such a classic as Christmas Carol.

Next month, Gonzo-heavy Muppets From Space, which I’ve never seen.

(Please note, next month’s film will have been seen pre-The Muppets, but due to timing, I’ll have seen The Muppets a few times before that blog will have been written, will avoid as many nods to possible pay-offs in the latest film as possible)