I love The Muppets. How can you not? I’ve certainly grown up with them deeply part of the culture, and every christmas we’ll play The Muppet’s Christmas Carol as our version of the classic story (More on that in December, naturally), but as the new film approaches release, some 3 months after the Americans get it, and I saw this opportunity arise to look over a Muppet movie a month until then, well, I couldn’t resist. Having said I love The Muppets, I never realised just how many films they had, and the early ones didn’t get any airtime when I was young, so I’ve never seen them, until December, each month’s blog post will be me discovering a new Muppet Movie, in this case, The Muppet Movie.

The film opens in a gloriously meta manner perfect for the cast we adore so much, nice to offer the opening to Statler and Waldorf, as a narrative structure rarely allows them to do anything, playing the audience doesn’t quite sit well to an audience captivated to an ongoing story, moreso for skits, sketches and the like, shortform with breaks to belittle and joke around.

We follow them to a screening room, in which Kermit has gathered the gang to see his new masterpiece, that of The Muppet Movie, conveniently, and as we open on a rendition of the song Rainbow Connection, it’s quite slow, surprisingly simple and lacking any immediate comedy, even when cameo number one drops in. Now, for these cameos, beyond two people, I had to use imdb as they don’t resonate with me, but first off the bat is Dom DeLuise.

He suggests Kermit try the entertainment industry, away from his lonely life in the swamp, making people happy. To which, Kermie leaps at the opportunity, rushing to civilisation, only to be noticed by a frog-leg restauranteur struggling to get the right image for a marketing campaign. Insert antagonist chasing and maniacally plotting in the middle of Muppet mayhem the entire film. But the film is a buddy picture about the forming of the Muppets, and predominantly the forming of a friendship between our man in green and genius comic Fozzie Bear, as they road-trip from Florida to California. 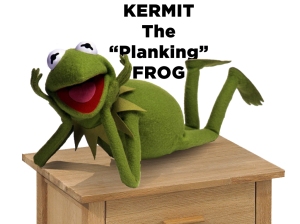 Now, I wish I could say here how much I loved the film, and yes there are some absolute genius moments, brilliant one liners, puns, songs and character beats (mostly to do with Gonzo, because he’s the best Muppet ever) but the film has a rather slow pace for the types of genre it hits upon, and oddly there are awful long stretches between gags around the middle. Even Steve Martin can’t seem to raise a smile as a rather passive aggressive waiter.

There’s certainly a surreal element when Orson Welles sits in front of your favourite characters and converses with them. I mean, that’s Kermit freakin… erm, Orson freaking Welles.

But it’s hard to believe that The Muppet Movie is the theatrical debut of the acclaimed team, it feels a little ragged, unpolished, kind of dull in fact, and whilst it certainly can entertain kids, it never rises to the levels that a Muppet movie kind of should, but perhaps that’s putting them on a nostalgic pedestal, and that’s what this effort is all about.

As it stands, there wasn’t much that was really worthwhile in The Muppet Movie, the jokes, whilst solid, never hit notes of pure hilarity and the plot didn’t feel as interesting or as epic in scope as one would expect. The scenes in the screening room had a nice feel to them, a very loose attitude that the show indulged in, and let characters be characters, sometimes it’s better for Muppets to be let loose like animal on the drums, rather than chained to a plodding, uninspired narrative. Then again, too much of a good thing can be bad for you.